Due to strict regulations imposed by Cognac’s Appellation d’Origine Contrôlée (AOC), Alexandre Gabriel was obligated to stop using his cognac pot stills for seven months of the year. After five long years of negotiations, he finally obtained the AOC authorization to distill during the period that the stills were meant to be dormant. In 1996, Citadelle was born as the first artisanal Gin de France, leading the movement for artisanal gins. 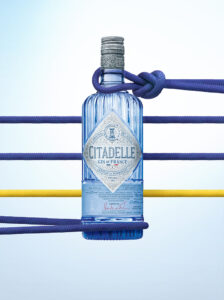 Everything begins at the Châteaude Bonbonnet. This is where we grow the juniper berries, the signature botanical of Citadelle, whose character is expressed in harmony with 18 others pices. To achieve this balance, Citadelle hasinvented the progressive infusion method, making it one of the only patented gins in the world. It is then distilled in small copper stills over open flames. Our team is constantly researching methods and likes to push the limits of the ageing process. With Citadelle Réserve, we experiment with ageing techniques by selecting singular woods pecies. Six types of casks are used in the ageing process of Citadelle Réserve: acacia, mulberry, cherrywood, chestnut, French oak that’s to red Pineaude Charentes, and French oak that stored cognac. After time in the different casks, the gin is blended in a patented wood receptacle in the form of an egg. We are the first and only gin in the world to use this method.